First off, I would like to apologize.  I tried, I really tried, to fix the condition that this episode of Gralen And Jeddy is in, because it is really horrible.  But there is only so much that photo editing software can do, and I tried it all.  There are small stains, probably what looks like a chocolate candy bar, and larger ones, which knowing me was probably chocolate milk.  But those things, plus the fact that it was made with my usual habit of scrunching a lot of words together, makes it virtually unreadable(you should see the original BEFORE I “fixed” it).  So thus, I will be transcribing the dialogue for this one.

It starts with Gralen and his son, Jessy, leaving a church service.  Jessy then asks Gralen: “Gralen(don’t ask why he calls his dad by his first name), do you sometimes doubt God?”

To which Gralen replies: “Well, sometimes Jessy, even though you are not supposed to.  And I think if you ask other people if they do doubt God, I think they’ll say no.”

The next panel consists of Jessy running around all over the neighborhood asking people if they doubt in God, with dotted lines marking his path, á la Family Circus.

Gralen: “Well, what did they say?”

Gralen:  “I told you they would.  And what if I ask if you wanted to go jogging?”

Hmmmm, I wonder how many people would say “no” to Jessy’s question today. 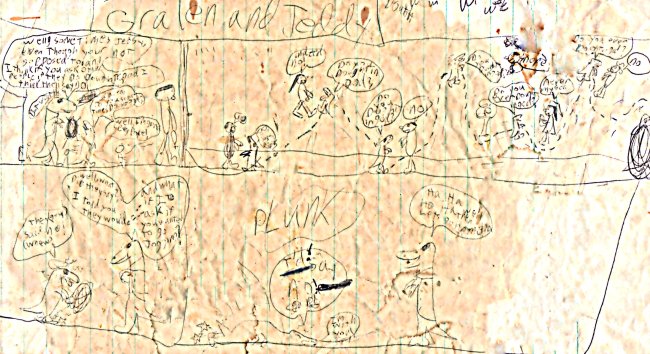